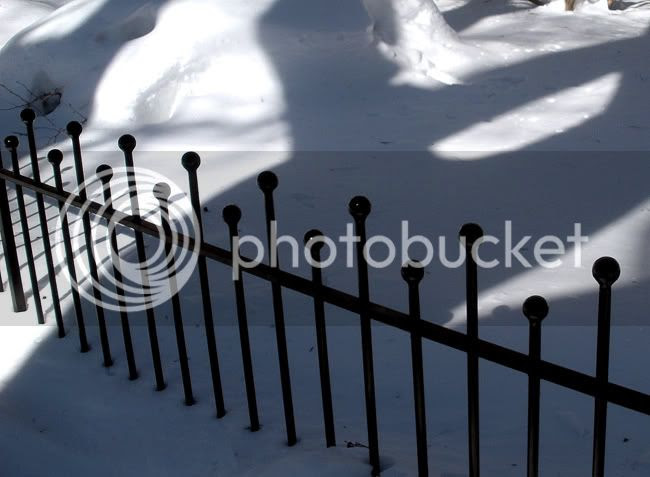 In the evening, when little Kay was at home, and half undressed, he climbed up on the chair by the window, and peeped out of the little hole [made by a warm penny pressed against the frozen glass]. A few snow-flakes were falling, and one, the largest of all, remained lying on the edge of a flower-pot.

The flake of snow grew larger and larger; and at last it was like a young lady, dressed in the finest white gauze, made of a million little flakes like stars. She was so beautiful and delicate, but she was of ice, of dazzling, sparkling ice; yet she lived; her eyes gazed fixedly, like two stars; but there was neither quiet nor repose in them. She nodded towards the window, and beckoned with her hand. The little boy was frightened, and jumped down from the chair; it seemed to him as if, at the same moment, a large bird flew past the window.

--from The Snow Queen by Hans Christien Andersen

We won't be getting another three feet of snow, but between 1" and 5" tonight or tomorrow. I am in awe. All this snow - wow.

What to do? Get the shovel ready again? Squint up into the sky? Shake my fist?

Nah. Instead, I decided to re-read The Snow Queen. When I picked up the volume of Andersen fairytales, the book opened automatically to that story. I've read it so many times. Gerda, the heroine, is young and completely innocent. She cries all the time, gets scared, but never gives up. I love that! Every major role in the story, including the villain and all the people who help Gerda, are women, and we aren't talking sweet, lovely stereotypes, oh no. Witches, shamans, little robber girls - oh yeah - these are some high powered female characters. The only male presences, in fact, are Kay, the little boy who gets kidnapped by the Snow Queen, a young prince (who by the way does NOT marry Gerda), and two animals, the reindeer and the crow, who help Gerda with her quest.

Oh snow gods I bow deeply before you! More snow? OK. If snow in the forecast guides me to read The Snow Queen, then it can't be all bad. More snow?? Why not? Bring it on. Yeah. 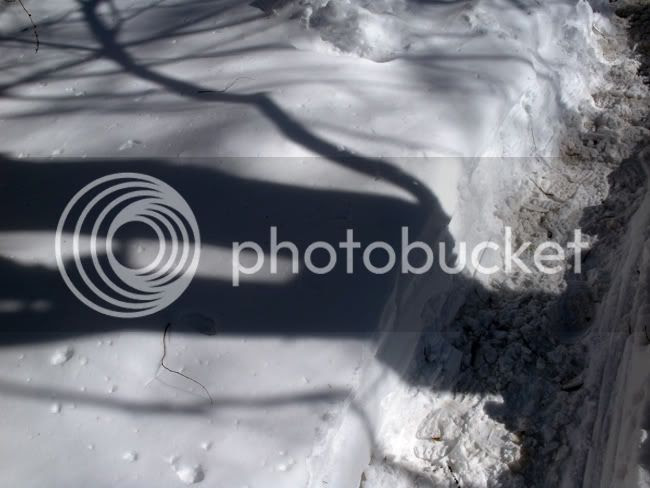 Posted by Reya Mellicker at 8:34 AM

What an excellent choice! One of my very earliest memories is watching an animated version of that story at the drive-in in Bellows Falls, VT--it was terrifying! I can't believe what's happening in the D.C. area with this snow you're getting.

perfect! Now all you need is some cocoa and a seat by the window! We are in for some more white stuff as well. No way around it only through it--spring will be here soon--enjoy and stay warm.

Another week of winter temps here but at least we have a blue sky day instead of the overcast that has been accompanying our winter days.

"he climbed up on the chair by the window, and peeped out of the little hole [made by a warm penny pressed against the frozen glass]". wow!!! wow!!! i'll be looking for this story to share with my class for tomorrow. thankyou. steven

did your groundhog call for this, or what? Luckily for you spring is just waiting to bust out all over like a can of whoop-ass. I'm counting down here...another 4 weeks if we're lucky.

All that snow is a bit humbling isn't it? That story is a great read. I love the way he writes. Maybe they should have held the Olympics in DC since they're having not enough snow.

We're getting 10 more inches, as we speak. A little more of this and the manor will be completely covered. Is it coming your way? I bet you hope not.

Tom, I believe this spring in DC is going to be an exploding can of whoop-ass, oh yeah. I expect lots of craziness.

I'm feeling philosophical about this storm. The flakes are beautiful - tiny stars just like in the story. My camera's macro function is crap so I couldn't get pictures, but it's beautiful.

I'm having a snowtini, with olives today instead of a twist. Just one. Snowtinis are a great tonic for this series of storms, oh yeah.

When it goes- it's gone- forever- You will probably never have another like it ever! Folks will be talking about it like the storm of '49...back in those days when they really did walk barefoot to school...

I'd still rather have the sun and heat than snow.

Interesting, and kind of creepy! I've never read HCR, but there's a statue of him in Central Park -- no doubt quite snowy by now! Glad this weather is taking you places!